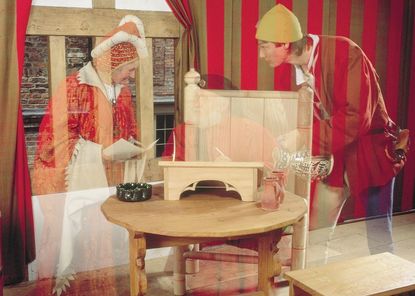 Historic York is Europe’s most haunted city – and that’s official! It is filled to the gills with cobbled streets with strange-sounding names and the odd ghostly presence or three......

Mad Alice Lane
One scary place is Mad Alice Lane, home of poor, mad Alice Smith. In 1825 she was taken to the castle and hanged for the ‘crime’ of insanity – but sssh! They say that her restless spirit haunts the alleyway.

The Treasurer’s House
Mentioned in the Guinness Book of Records for hosting ‘Ghosts of Greatest Longevity’. One of the city’s most famous ghostly events took place in 1953 when a plumber saw Roman soldiers appear through a wall. He described their uniforms and equipment in precise detail. This was later verified by experts as members of the 9th Legion, stationed at York over 1,600 years ago.

Holy Trinity Church
Another phantom haunts the churchyard of 15th-century Holy Trinity Church in Goodramgate. In his lifetime, he was Thomas Percy, Earl of Northumberland, executed for plotting against Queen Elizabeth I. His head was displayed on a pole and according to local legend, he has been looking for it ever since.

York’s pubs
York’s pubs have more spirits than those behind the bar too. The Snickleway Inn purports to have nine ghosts, while the 14th-century Golden Fleece has a grumpy old man who mysteriously disappears into thin air….

The Grey Lady
When it comes to spirits, there are no shortage of Grey Ladies around. York lays claim to one too, she haunts a room behind the dress circle in the Theatre Royal. In medieval times this was part of the old Hospital of St Leonard, run by nuns. One fell in love with a nobleman and the pair became lovers.  Ah, the scandal!  They were found out and she was locked in a windowless room which was bricked up. It's now part of the theatre. However the good news is, if you spot her, then it's a good omen for the production.

St William’s College
The College harbours a 16th century ghost with a  guilty conscience.  Back in the day when two impecunious brothers were lodging there they decided to rob a wealthy priest from the Minster. They mugged him, stole his jewellery and purse and slit his throat. The younger brother was overcome with remorse and the older sibling feared he would give the game away so reported his younger brother to the authorities and turned a blind eye as he was tried and hanged for murder. The elder brother died soon after, racked with guilt.No wonder his unhappy spirit paces the floors of St William’s College.