visiting brussels?   here are 8 things to see and do

Belgium’s capital city is only a hop, skip and jump from our shores and of course, that makes it an ideal weekend break destination.
Here are eight attractions to tick off your list before you come home again.

1. The Belgian Comic Strip Centre
Ah, I see. So you're not too keen on museums.   Okay,  but this one is a must visit - I promise.  Right in the heart of Brussels, the Comic Art Museum has been honouring comic creators and heroes  for almost 30 years.  Did you know that Belgium has more comic strip artists per square kilometre than anywhere else?  The museum tells you everything you need to know about comic strip artists and there are thousands of original drawings to see - plus a whole area dedicated to Tin Tin, Belgium's famous cartoon character.
2. Grand Place
Brussels main tourist attraction and a UNESCO World Heritage site.   You just have to stop for a coffee in this cobblestoned market square because there's nowhere better to take time to admire the elegant guildhouses which replaced the original wooden medieval buildings.  There's a daily flower market, usually held between March and October too and the occasional open air concert.

​3.  Heysel Park and the Atomium
A highlight of delightful Heysel Park in the west of Brussels is  the Atomium. This 102m high model of an atom is a fabulous creation of chrome and steel originally built in 1958 to symbolise the start of a new ‘atomic’ age.  It is made up of nine, 18 metre diameter steel spheres all containing exhibits. A high-speed, glass-roofed lift whizzes you to the top where you can have refreshments, ooh and aah at the views and then on the way down again, you can stop at the various spheres.​ 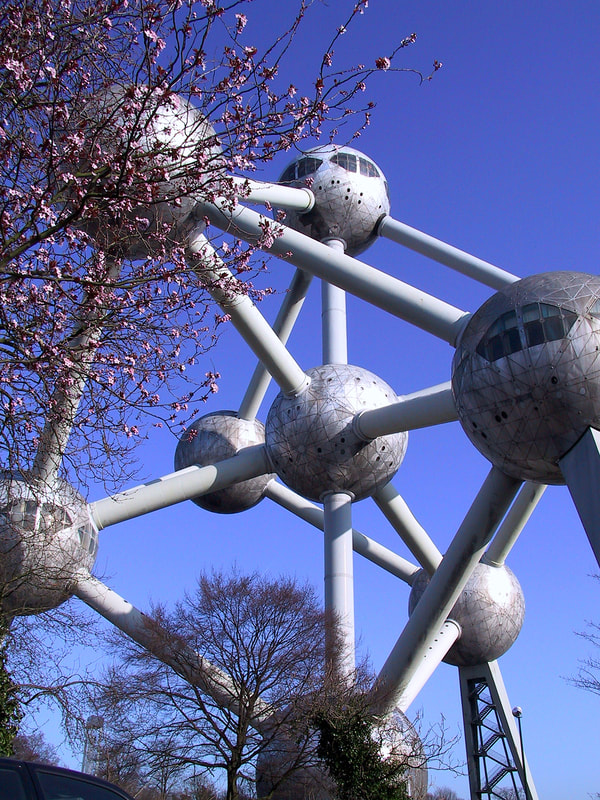 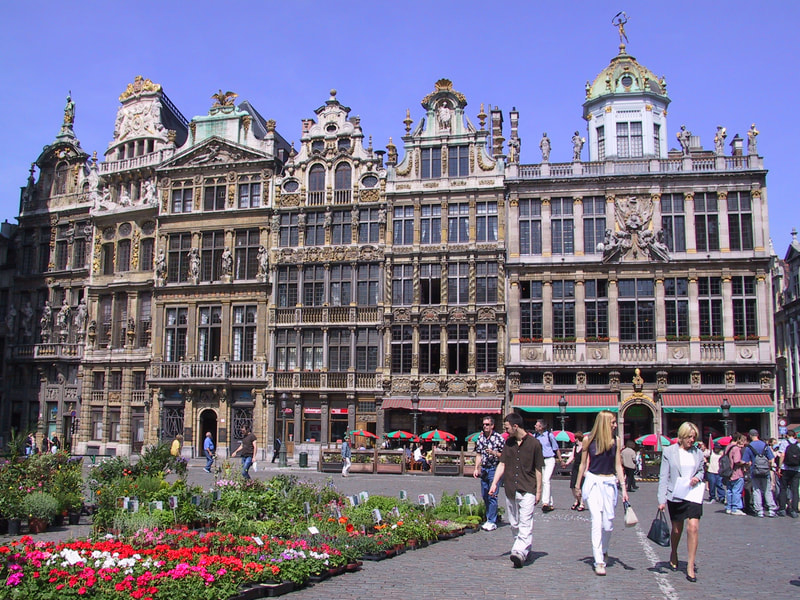 4. Mini-Europe
Next to the Atomium is a 25 hectare leisure park with  a whole lot of attractions including  a 27 cinema complex, an all-round Imax screen,  planetarium and L'Oceade, a water park.  The best bit though is the open air museum showcasing a selection of Europe's most famous buildings, all at 1/25th of their original size.  It's fun to see  the TGV high-speed train as it whooshes from Paris to the other end of France and hear Big Ben's chimes welcoming you to London.  Even more fun is the fact that you can make the models work yourself, so you can make Vesuvius erupt,  the Berlin Wall fall and officiate at  the take off of the Ariane spaceship. I know, back to your childhood ....

5. Hôtel de Ville – Town Hall
The Gothic Hôtel de Ville in the Grand Place dates back to 1402.  This  seat of civic government is a beautiful building with arched windows, towers and sculptures, one of which is  St Michael killing a she-devil. If you feel energetic, you could climb the 96 metre high tower and take in  the  far reaching views.
​ 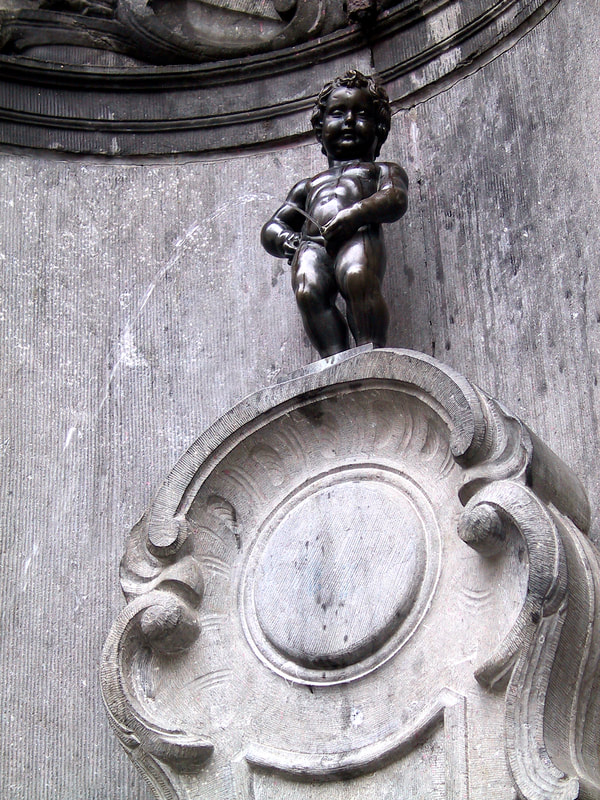 6. The Musical Instruments Museum
The Musical Instruments Museum (MIM) is a handsome art nouveau building.  Every instrument you could dream off is here,  including one of my favourites, the bagpipes!   I don't like to say it really, but it's not only Scotland that can boast about this magnificent instrument. Some other countries have their own version - not quite like ours, though.  And, this is interesting,  African slit drums are the local form of Twitter!  .After you've been round the exhibits you could go up to the rooftop terrace and have a drink while looking over the city.

7. Manneken-Pis
Even if you know nothing about Brussels attractions, you're bound to have heard of the Manneken-Pis , he is a major player in the folklore of Brussels.  No doubt Brussels most photographed statue, yet small,  only 60cm high. He is normally naked but sometimes he does get to wear clothes, usually when there is an anniversary or specific event on. In fact his wardrobe is pretty impressive - much bigger than mine, with  600 outfits which are  displayed in the Maison du Roi. (City Museum.) Trying to find him?  Head for the  junction of Rue de l’Étuve/Stoofstraat and Rue du Chêne/Eikstraat. ,


8. City Museum
A museum dedicated to Brussels history and if you have already been to see the Manneken-Pis, this is where you can have a look at his costumes. The history of Brussels is told over three floors from the Middle Ages to date.

And if this has whetted your appetite to visit Brussels, there is a little map below to help you find where things are.