The Intriguing Isle of Man

This island of sleepy Victorian villages, with rugged coastline, wooded glens, moorland and wildlife galore, lies 90kms off the English coast.  It is not part of the United Kingdom but is part of the British Isles, is a British Crown Dependency and has its own language, Manx.  It also holds claim to the world’s oldest continuous parliament, the Tynwald, dating to 979AD.   Every year Tynwald Day is celebrated in July in the village of St John’s with lashings of colour, pomp and ceremony.  However, probably the island’s best claim to fame, well, besides its tailless cats and four horned sheep, is the annual high-octane TT (Tourist Trophy) motorcycle races.   That and the fact it is a tax haven for those who have more cash then they know what do with. Some films have been made here too and according to locals, stars like Johnny Depp, Bill Nighy and Renee Zellwegger have been spotted jogging along the beach, enjoying a drink in a pub or striding out in the countryside.
The island is proud of its vintage railways including the ancient Steam Railway which still rattles along with plenty of energy, the Manx Electric Railway and Snaefell Mountain Railway in the village of Laxey.
photos (c) Gilly Pickup - click on images to enlarge 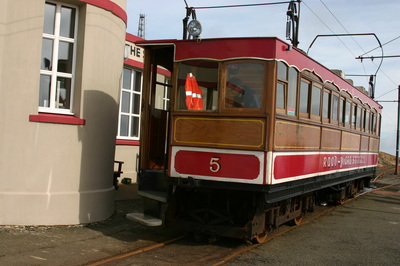 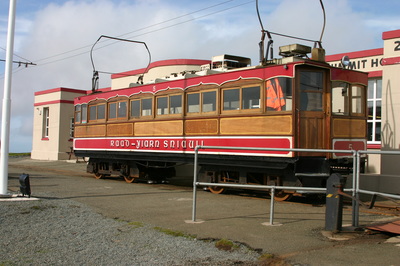 Our base was Douglas, the island’s quiet capital, a somewhat faded little town awash with Victorian quirkiness but no lack of charm.  In its heyday, Douglas was a bustling holiday resort with throngs of visitors arriving by ferry from the mainland. Nowadays, although its main shopping street is run-of-the-mill, it has a worthy entertainment complex, the Villa Marina and Gaiety Theatre on the sea front. These hubs of live entertainment present a programme of theatre, cinema, art and music. Then there’s the Horse Trams.  Dating from 1876, they travel the length of the promenade from May to September. The horses, known as ‘trammers’, begin pulling trams when they are about four years old and have an average working life of 15 years.  Horse lovers like me need have no concerns about the animals' welfare though. They work no longer than two hours a day during the summer season with the rest of the year off to enjoy grazing and on retirement, spend the rest of their lives at the Home of Rest for Old Horses on Richmond Hill, on the outskirts of Douglas. 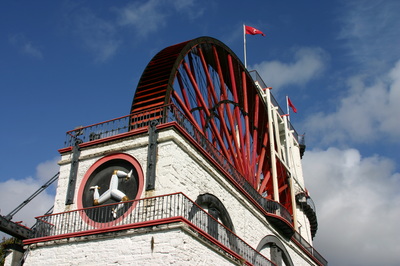 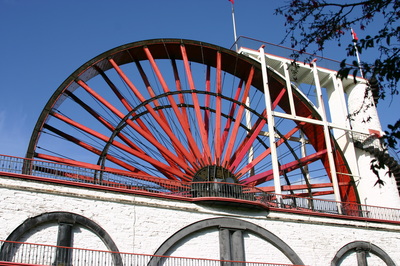 We hopped onboard the Snaefell Mountain Railwayand chugged upwards through the countryside at a gentle pace, passing by the huge red Laxey Wheel, largest working water wheel in the world. At one point the driver stopped to allow his passengers photo opportunities, also making an unscheduled stop for two sheep who found their way onto the tracks. After clanging his bell a couple of times they decided to move back up to the safety of their grazing pasture allowing us to proceed. This electric rail route was a favourite with movers and shakers of the day when it was built in 1895 and is still as popular as ever. It takes 30 minutes to reach the 2036 ft summit of Snaefell (Snow Mountain) and at the top is a cafe and 360-degree view.  On a clear day, you can see across the Irish Sea to the Mountains of Mourne, the Cumbrian Mountains to the east, Galloway to the north and Snowdonia to the south.

Find out what The Holiday Magazine thinks of the Isle of Man here     https://www.holidaymag.co.uk/isle-of-man.html

Back down in Laxey, the Heritage Trail is worth following.   If you're moving at a leisurely pace, it takes around two hours to complete. It includes the mine workings in its upper reaches, a tiny harbour, the five-arched Monks Bridge and Tent Road, so-called because of the tents once erected here for Laxey Fair.  Pause at Dumbells Row, known as Ham and Egg Terrace since many dwellings in this line of industrial housing built in 1860 started selling teas and meals to visitors.

The island has 17 national glens, generally categorised as either mountain or coastal in nature. When the Victorians started to visit the island in their droves, pleasure gardens, follies and attractions including the still operating Groudle Glen Railway were created to popularise the glens. 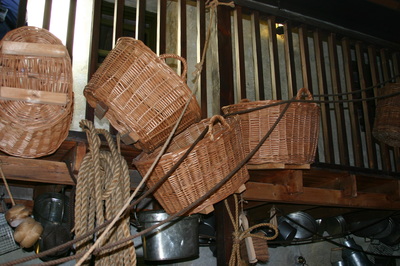 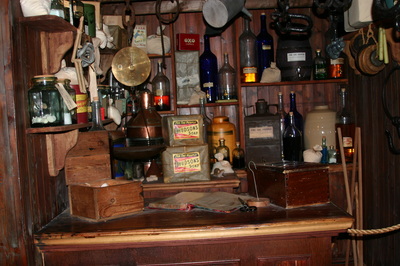 The town of Peel on the west coast is home to an ambitious heritage attraction, the House of Manannan (above) named in honour of an ancient sea god.  Inside we wandered through reconstructions of sailmakers and coopers shops and even a Manx kipper yard, complete with authentic smells.  If history is not your bag, Peel also offers pristine sands, an 18-hole golf course, scintillating sunsets and fabulous ice cream. It has a castle too, which has held celebrated prisoners including Eleanor, Duchess of Gloucester accused of treason and sorcery against King Henry V1. Now they say her ghost haunts the cathedral crypt. Legend maybe, but not too hard to believe when dusk falls and the cathedral and castle ruins are outlined eerily against the sky.
Return to Features Index                                                         all images copyright Gilly Pickup
Tweet
Follow @gilly_pickup
Follow @travellinglady_
© COPYRIGHT  Gilly Pickup    ALL RIGHTS RESERVED.