​Tucked away in the far northeast corner of the Netherlands is the erstwhile Hanseatic city of Groningen, a  charming provincial capital with bubbling arts scene.  Groningen is awash with green spaces, cultural attractions, fine restaurants and gabled houses, all reflected in the miles of scenic canals.

Groningen is sometimes referred to as the most Italian city north of the Alps and it can’t be denied that Italian architects have left their mark. Fine examples of Italian architecture are all around from Alessandro Mendini’s Groninger Museum and the Waagstraat Complex by Adolpho Natalini, to the public library by Giorgio Grassi.

It is easy to feel overwhelmed by bicycles here; it is the mode of travel for 60% of journeys taken in Groningen. The centre is almost car-free with a network of cycle paths and bus lanes and plenty of cycle parking.  According to research, 97% of locals are satisfied with living in this ancient city with a young heart - thanks to its university and thriving student life.  What’s more, it is the highest ranking city for quality of life in the Netherlands.  Can’t be bad then….
click on any image to enlarge 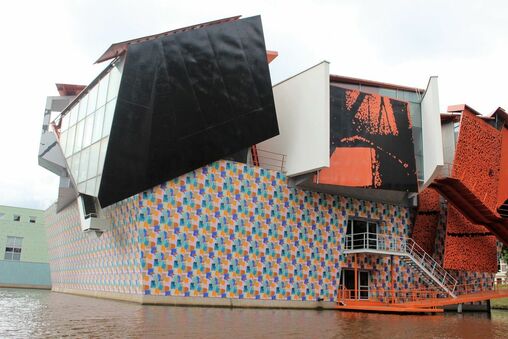 Something Special on every Street Corner

​The Grafisch Museum is for anyone who loves typefaces and scripts, book binding and every printing technology under the sun.  Better still, many of the old presses and graphic machines are still in working order. There is the University Museum too, which describes itself as ‘a museum for man, nature and science’.  If you like all that’s  gory you’ll love the torso which was frozen before being sawn into sections and the blackened lung - bound to make smokers think again.  Meanwhile the Groninger Museum, an oddly shaped modernist structure which may not be to everyone’s taste, houses archaeological finds, portraits of prominent Groningers from days of yore and examples of regional arts and crafts including Groningen silver.

Standing 97 metres high, the Martini Tower has kept a watchful eye on the city for more than five hundred years.  If you want to hoof it to the top you are rewarded by views that are riveting from all angles. Locals refer to the structure as ‘d’Olle Grieze’ meaning the ‘Old Gray One’ due to the colour of the weather beaten sandstone.   A church of the same name, Martini Kerk, was where -  or so the story goes - pilgrims in the middle ages came to view a relic, the arm of John the Baptist.  There again, several different locations lay claim to portions of John including Jerusalem, Alexandria and Bulgaria, while Damascus, Rome and Munich say they have his head.  Anyway, the Martini Kerk organ has its own true claim to fame. It dates from before 1450 and is one of the Netherlands oldest musical instruments. And the name, Martini?  Nothing to do with the drink, it refers to St Martin.
From the Ancient to the Modern
When 50% of the population is under 35 years old you can expect a buzzing nightlife. Nightbirds should head for the Grote Markt – the Great Market – where the entire south side has morphed into a huge bar complex. De Drie Gezusters (The Three Sisters) is Europe’s largest pub. It holds 3750 people and is made up of four connected buildings which house around twenty bars. Jazz fans might want to indulge their passion at the De Spieghel in Peperstraat, while funky folks will like the Buckshot at the Zuiderdiep, open till 3 a.m. most days.

​Groningen has countless festivals too. The Noorderzon is a summer highlight where over eleven days the town attracts an extra 130,000 people who come to enjoy this fest of music, dance, visual arts, multimedia and theatre while in the second week of January, more than 250 pop acts descend on town for the Eurosonic festival which showcases Dutch musical talent.

Groningen has several ‘coffee shops’, some are set up like a full service cafe which just happens to sell cannabis and allows patrons to smoke it. Although some also sell space cakes, pastries with the drug baked into them, alcohol is not served in any of these coffee shops and rather incongruously, smoking (normal) cigarettes is frowned upon.
The Quirky and the Quaint
In a narrow cobbled  canalside street there is a public urinal.  Granted, this is something most people would try to avoid, but this particular facility is not only functional but also decorative. Designed by architect Rem Koolhaas, this look-at-me public loo is a work of art, its milky coloured glass decorated with blue and black figures.

Another unusual building is the Wall House on the banks of the Hoormse Meer. It has come to be recognised as an icon for Groningen as a city of architecture.  A thick wall is its central feature while the entrance and living elements are literally attached to it. Its current function is to house artists in residence.

Then there are the almshouses, more than 30 of them. Hidden behind ornate wrought iron doors, these clusters of dwellings once provided shelter for the poor and sick. The 15th century St Geertruidsgasthuis has two courtyards and was originally where pilgrims stayed. The bars on some windows are reminders that part of the building was once a mental home where on Sunday evenings, patients were exhibited to the public in exchange for a fee. Visitors can take guided walks through the inner courts of these almshouses but remember don’t peer through the windows, nowadays these are private houses. 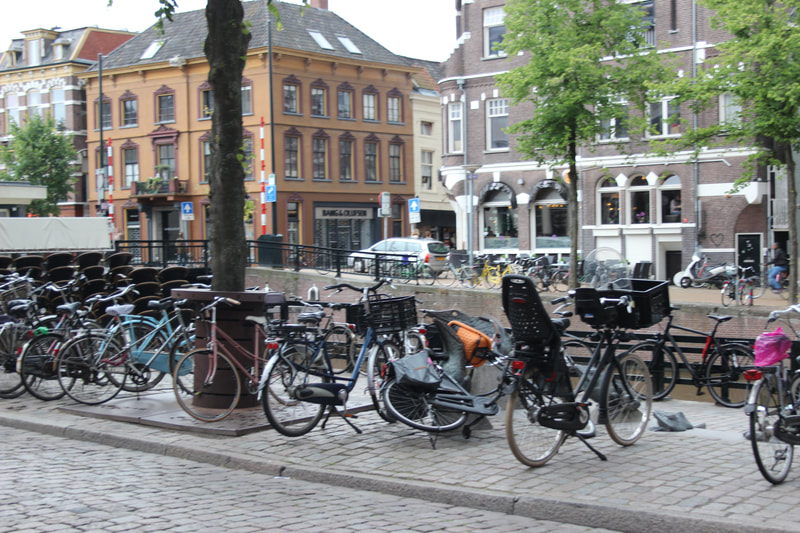