A Mini Guide to Frankfurt

WORDS & IMAGES  ​©  GILLY PICKUP
​Birthplace of Goethe and referred to as the ‘smallest major city in the world’, Frankfurt am Main is a trade fair centre and financial hub with more than 300 banks and a glut of striking architecture. Its sea of skyscrapers inspires its nickname ‘Mainhattan.’

See the Sights
A good place to get an overview of this energetic city is from the top of Main Tower, Frankfurt's highest public viewing platform open to the elements. A high speed lift whisks you to the top. There is a restaurant and cocktail bar on the 53rd floor, one below the viewing terrace. Frankfurt leads Germany in high rise buildings and to the north /northwest is the banking district, home to the 256m-high peak of the elegant Messeturm, easy to see why locals call it the Bleistift (pencil). Close by is Europe's tallest office block, the 258m-high (298m including the antenna) Commerzbank Tower designed by Sir Norman Foster.

The Römerberg is Frankfurt’s historic heart and location of the City Hall. Flanked by half-timbered houses, this was where Frankfurt's first trade fairs were held in 1240 when the emperor guaranteed merchants ‘safe passage in the city’.
click on any image to enlarge    all  ©  Gilly Pickup 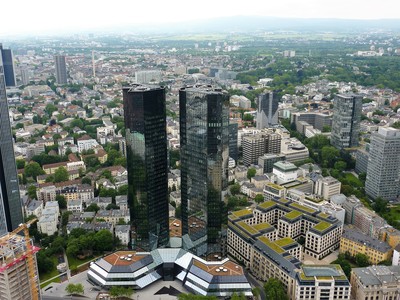 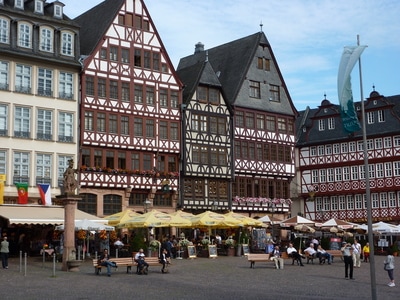 All Things Cultural
As you might expect in Goethe’s city, literature plays a significant role  and the Frankfurt Book Fair takes centre stage every autumn.  Venues throughout the city host readings, discussions and events which attract artists and authors from all around the world.
Art lovers are in their element here too.  The Stadel Institute of Art, the city’s largest art gallery, covers every era of art history right up to the present day.  You’ll find almost 3000 paintings here including works by Munch, Renoir, Monet and Degas.

Frankfurt has museums galore.  Ten of them sit together on the Museum Riverbank and every summer they host one of Europe’s largest cultural celebrations, the Museum Embankment Festival, traditionally held on the last weekend of August. The riverside promenade comes alive with performances of live music, culinary delights from across the globe and first-class entertainment.

….. And Perhaps Not So Cultural
Those arriving by train at the Hauptbahnhof, the main station, should know that this Bahnhofsviertel or train station quarter, is also the city’s Red Light District. Although there are signs for sex shops and strip joints, the area has been redeveloped in recent years with trendy restaurants, upmarket clubs and luxury flats. 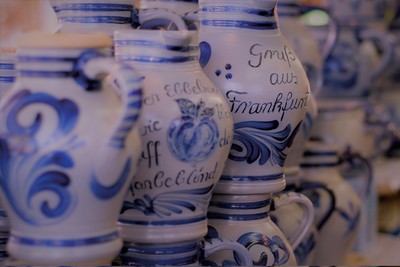 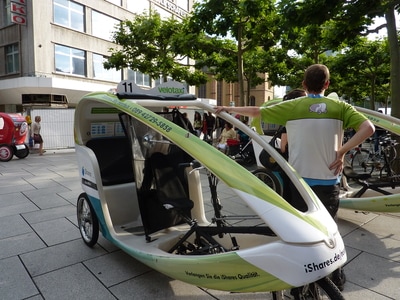 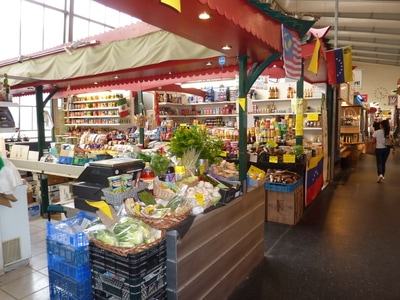 Travelling Around Town
It makes sense to buy a Frankfurt Card, the public transport pass which includes the airport.  It also provides reductions of up to 50% on admission to museums and botanical gardens, plus discounts in restaurants, cafes, bars and selected stores.

Must See
Don’t miss a trip to the Palmengarten (Palm Garden) a wonderland of tropical plants and exotic birds. Away from the bustle of the city centre, the attractions of this botanical garden include a boating lake while concerts and exhibitions are staged here in summer.

And So To Eat
There are countless places to eat in Frankfurt, from cosy beer gardens on the river banks to contemporary gourmet restaurants.  Fressgas is a lively street packed with bistros and restaurants.  For an authentic taste of town, try pork chops with sauerkraut or ‘Handkäs mit Musik‘,  small aromatic cheeses marinated in a vinegar and onion sauce and served with bread and butter.  Then there’s the famed ‘green sauce’ too, a much loved regional condiment concocted from around seven herbs and served with potatoes and meat dishes.

Of course, the ‘wurst’ (sausage) is a huge part of life here, so much so that it has entered the language. ‘Das ist mir wurst’ translates as ‘that is a sausage to me’, or ‘I don’t care.’ If you’re a sausage fan, try a ‘bratwurst’ a fat, fried pork sausage, or a long, thin ‘thueringer’, with mustard.

Locals love their apple wine too, it is about the strength of beer at 5.5 percent alcohol. It has a long history, over 1200 years, to the time of Charlemagne. Apple wine (also known as ebbelwei, äbbelwoi or stöffche,) is said to have a positive effect on the circulation and nervous system. Some local doctors recommend it to their patients. Chilled in summer, served warmly spiced in winter, apple wine is traditionally served in a blue-grey crockery jug called a  ‘Bembel’ and drunk from a ribbed glass, the ‘Gerippte’.

TIP   Hire a pedal-powered Velotaxi, a three-wheeled vehicle.  It gets you through traffic jams and to destinations in the pedestrianised down town area.

And, what’s that? Frankfurt’s dull?   You must be thinking of somewhere else……