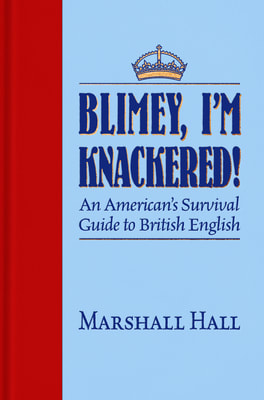 Let me start by saying 'Cheerio' to all you folks reading this.  No, I haven't gone bonkers,  but the author says Brits sometimes greet others by saying it.  (No, me neither.)

A pen and ink drawing of a map of the British Isles show the Scottish Highlands as lying somewhere near Edinburgh and while Scotland my homeland is being mentioned, oooh - an Arbroath smokie is NOT, NO WAY and NEVER WILL BE Scandinavian.  Wow!!!! To add insult to injury, he says - and I quote - "these may seem inedible".   Well, Mr Hall, I suggest you stay well away from Arbroath and Auchmithie, the fishing village on Scotland's east coast where Arbroath Smokies originated.

'Blinkered' is not a slang word and did the Beatles sing  a song called 'Bungalow Bill?  I've never heard of it.  Oh dear, it gets worse the more I read.  He says 'biscuits' are our version of American 'cookies'. Okay, that's fine.  He then goes on to say that some British biscuits have appealing names, for instance, 'Battenberg' (actually dear author, that isn't a biscuit, it's a cake), 'Dundee cake' (yep, the clue is in the name) and Victoria Sandwich.  I rest my cake.  Oops, sorry, I mean 'case'.

Bread rolls are dissected next. 'Rowies', my dear man are common in Aberdeenshire. They are not Welsh.  Cauliflower cheese is not solely 'children's food' .  We don't ask for 'maize' when we want sweetcorn and personally, I've never heard anyone refer to a sandwich as a 'sanger'.   Please tell me if you call them that though.   One section reads - now maybe you'd better count to ten before you read this - "English children' (and I'm assuming by English the author is also including  Scots, Irish and Welsh too), "are still raised to enjoy a range of foodstuffs that are more or less inedible. These include such offerings as the chip butty, that is French fries between slices of white bread and perplexing toppings for toast, like canned spaghetti and baked beans and Marmite, a black, salty yeasty spread that causes gagging in foreign nationals."

Picnics are described as "totally unlike the organized American version' being 'thrown together affairs and the food picked up from Marks & Spencer on the way."    Oooooh.     But the over riding feeling is that the British are a bit, uh, how can I put it?  A bit on the old fashioned side, a little quaint ...  bordering on eccentric, perhaps.  The author sums it up by including a quote from an American called Max Fisher, who says,  "In this country (ie. the UK) people are sitting on chairs that Americans would have behind glass in a museum."

Well, there you have it.

If you want to read it for yourself, it's available on Amazon.